It was a festive day for the cantorial choir Bystričan – On February 3rd, the Sunday afternoon they organized a Festival of the folklore songs from the region Zahorie being sponsored by the Slovak Matica and the Municipality of Bratislava – Záhorská Bystrica. In the year 2019 we commemorate the Centenary of the Slovak Matica revival, as well, as the 70th anniversary of the Slovak Matica – Local Division Bratislava – Zahorska Bystrica institution. The mentioned two milestones became an occassion for the cantorial choir Bystričan to create a new CD with the songs taken from the folklore song books of Dr. Janko Blaho. The official lead-in life of the brand new CD, which was entitled as „The Singing Záhorie“ opened the Festival. The godparents were Mgr.art. Helena Jurasovova, Mgr. Danka Blahova, the daughter and the granddaugter of Dr. Janko Blaho, the famous gatherer of the folkore songs from the Zahorie region and the mayor of Záhorská Bystrica Ing. Jozef Krúpa. Dr. Martinkovič, the choirmaster welcame the special guests, performers and the audience and expressed the thanks to the Slovak Matica and the Municipality of Bratislava, the institutions, who granted the project. After the festive act, the cantorial choir Bystričan sang some of the songs from the new CD being conducted by the cymbalo band LUDOVKA and the accordion of Štefan Martinkovič, the chairman of the Local division of Slovak Matica in Zahorska Bystrica and, at the same time, the choirmaster of the cantorial choir Bystrican, who has chosen and vocally dressed the songs for the new CD. Followed Denisa Kopačková, laureate of the song contest „Slovak Nightingale 2014“, female cantorial group Kytica from Bratislava, Jana and Jan Zaviačič from the folklore group VONICA, Czech Republic, The folklore group GBELAN, and the last, but not least, Ján Ambróz a famous singer of the folklore songs from Middle Slovakia, who pleased the audience with his well known songs being accompanied by the cymbalo music group LUDOVKA. At the end of the Festival the audience listened to the salutational intercession of JUDr. Marián Gešper, the chairmann of the Slovak Matica, who presented Dr. Martinkovič with a beautifull flower basket for the choir, together with commemorative medal of Slovak Matica on the occassion of the 70th anniversary of the Slovak Matica – Local Division Bratislava – Zahorska Bystrica institution. Followed, the salutational intercessions of Ing. Jozef Krúpa, the mayor of Záhorská Bystrica and Mgr.art. Helena Jurasovová – Blahová, who partook of the collected works of Dr. Janko Blaho entitled as Záhorácke pjesničky. In conclusion, Dr. Martinkovič, as main script-writer and dramagturgist thanked to all the performers, invited guests, as well, as the audience for the rich participation and last, but not least he expressed great thanks to all the sponsors, who helped to organize this great event on a high and worthy level. 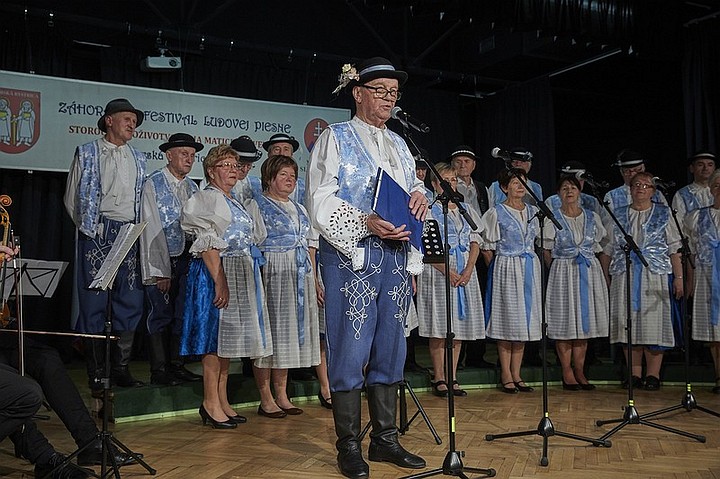 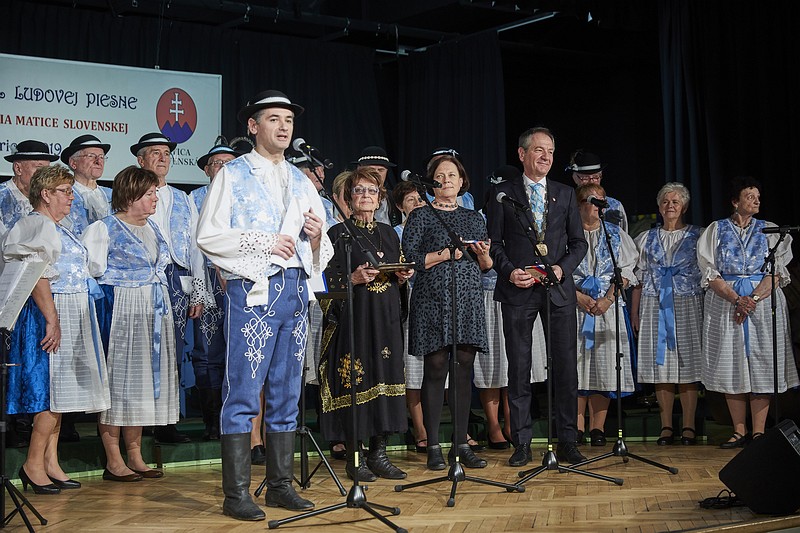 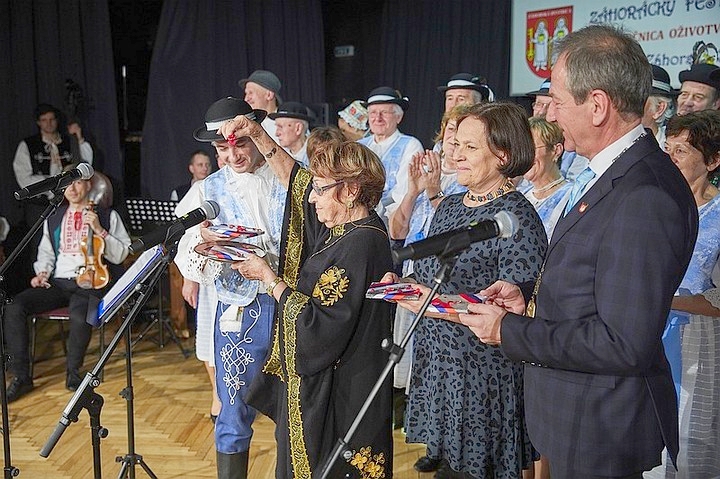 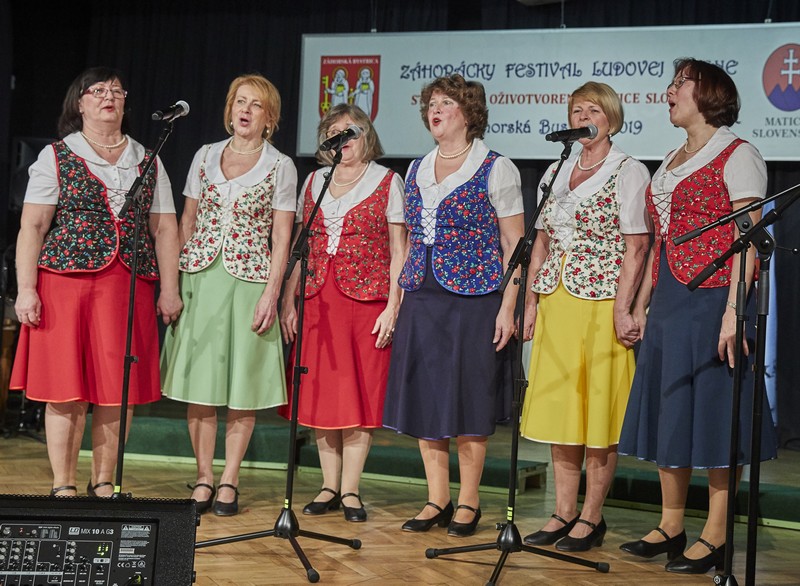 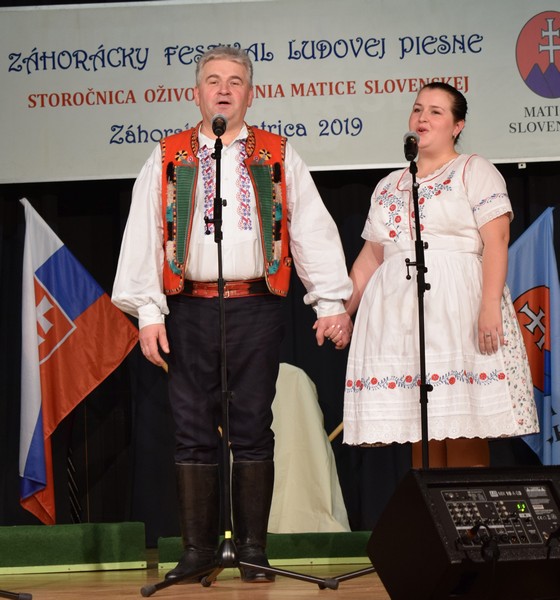 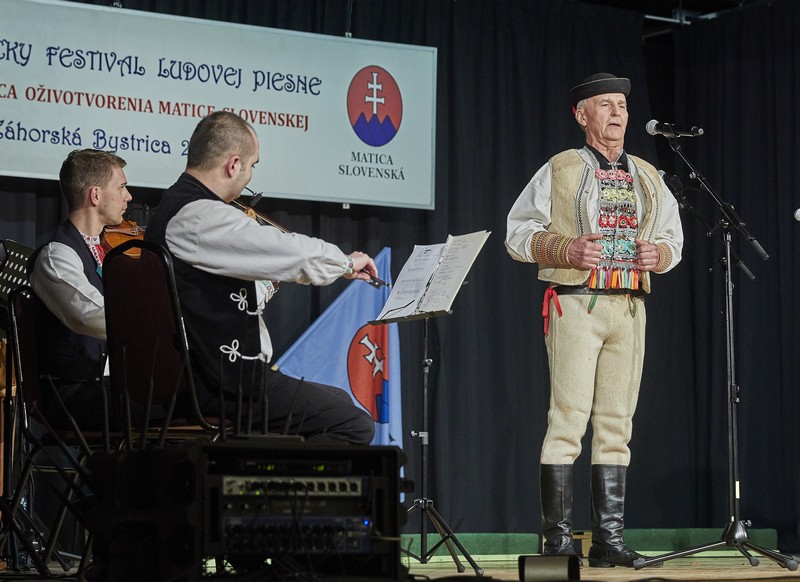 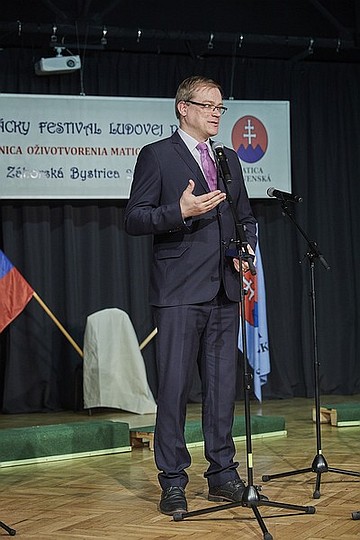 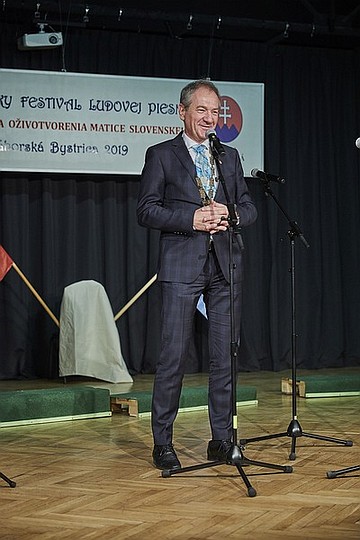 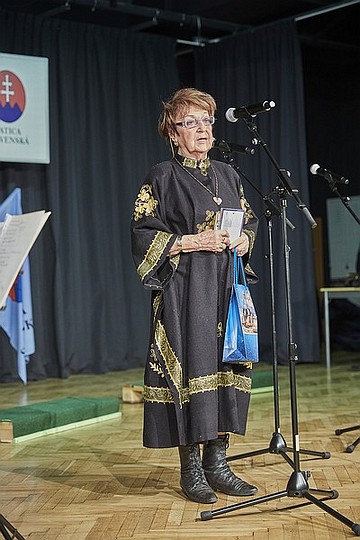 Ružičko červená
Po záhradze chodziua
Čua sem na veži
Pres to smrdácke pole
V síní dolinečka
Veselú mamičko
Cantorial Choir Bystričan in cooperation and the sponsorship with the municipality of Bratislava – Záhorská Bystrica accepted the invitation of the mayor of the friendly related Moravian municipality Brumovice to the participation of their costume Ball, taking place on Saturday, February 16 and to sing some of the folk songs from our repertory. The Municipality of Záhorská Bystrica ordered a bus not only for the cantorial choir Bystrican, but also for the other inhabitants, who were interested to take part. The delegation was led by the vice-mayor Martin Besedič and by the chief of the department of culture, Barbora Besedičová. In Brumovice we were warmly received by the village representatives, and by the representatives of the Folklore music Vonica, who applied themselves to us in the entire evening. We participated at the Costume show and sang several songs. Of course, there was also a free entertainment on a good brass-music. We express our thanks to the Municipality of Záhorská Bystrica for enabling our choir to participate at this event, which contributed to the development of themutual good relationship not only between the municipalities, but between the choirs Bystričan and Vonica, as well. 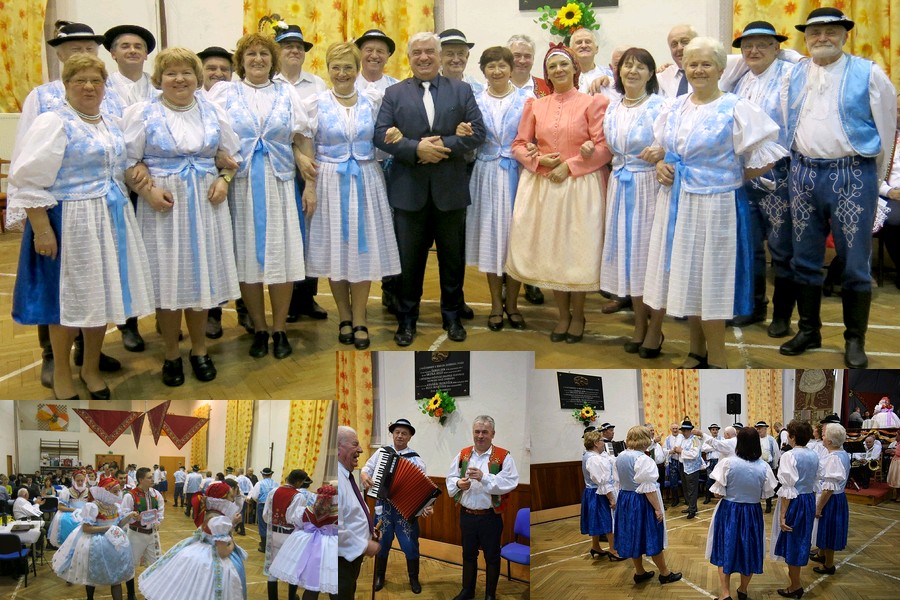 The Maypole Setting Fest in Záhorská Bystrica The traditional celebration of Maypole Setting on the last day of April took place at the Family Square in Záhorská Bystrica. The weather was not very favourfable, The kiosks were offering their specialties and the drinks, among which the beer and wine were most appreciated. So, the mood was great and the people anxciously awaited the arrival of the Maypole. The 25 metres long Maypole was brought to the square by horses at 6 p.m. being accompanied by the local voluntary firemen as well, as the Bystričan choir singing folk songs. After setting the May pole with the help of the hydraulics, the cultural programe could begin by the speech of Mr. Jozef Krúpa, the mayor of Záhorská Bystrica. Next, the Bystričan choir being led and accordion accompanied by it´s choirmaster, Štefan Martinkovič performed and pleased the audience with severall folk songs from their new CD called Spívavé Záhorí. The merriment last untill the heavy rain plunged the attendants into the nearby restaurant, where the amusement went on. It was a very pronounced evening thanks not only to the performers, but also the organizers and the local voluntary firemen. 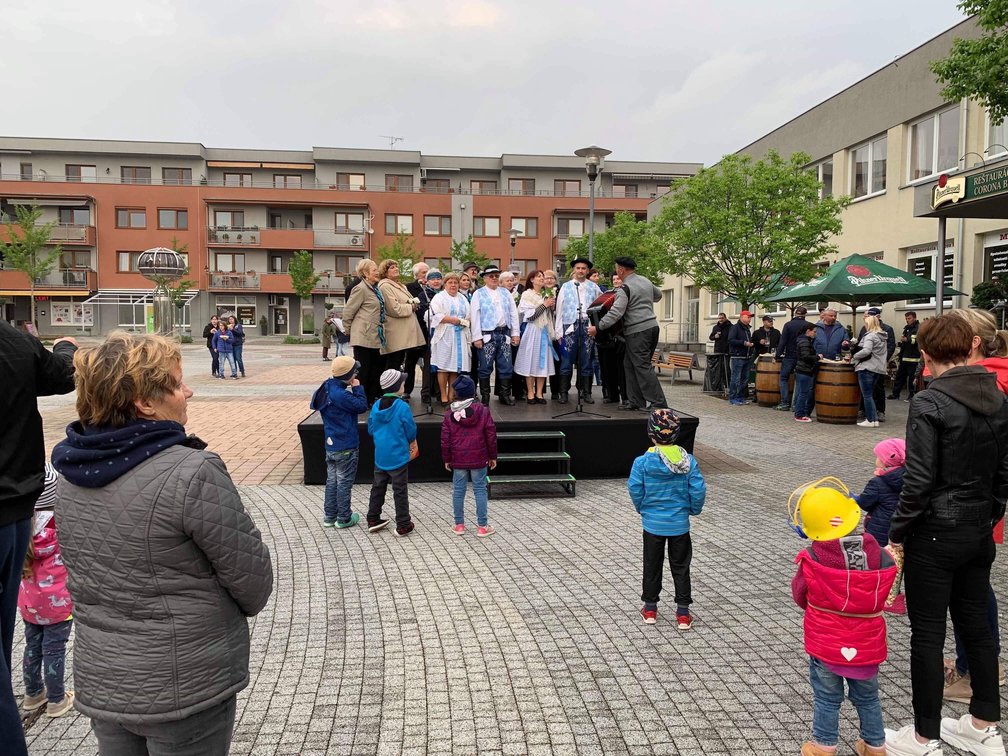 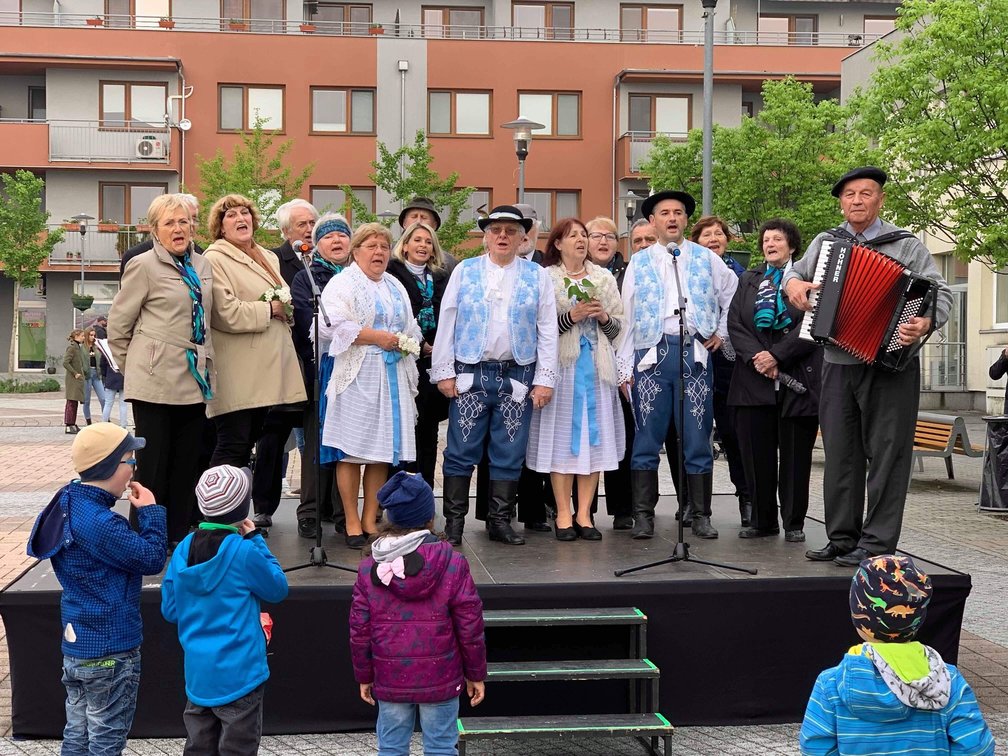 Our cantorial choir has not been idle even during the Christmas season. On December 26, we sang during the holy masses at the church Of the Sacrosanct Jesus´ Heart in Most by Bratislava. Our program included two carols and two compositions: „Gloria Tibi Trinitas“ by an anonymous and „ A Betlemme di Giudea“ composed by A. Lohman.

On December 27, we took part in the Christmas concert performed in the ancient temple in Dúbravka built in 1730. The temple was dedicated to the Saints Kozma and Damián. The crouded Temple was the venue for well known Slovakian opera singers and severall cantorial choirs, including our cantorial choir Bystričan. We sang „Gloria Tibi Trinitas“ and „ A Betlemme di Giudea“ composed by A. Lohman and „Veni Jesu“ composed by L. Cherubini. Our performance conducted by our choirmaster Dr. Štefan Martinkovič impressed and was warmly received by the audience.